Thriving 30 million dollars business from a school project. Find out how she did it. 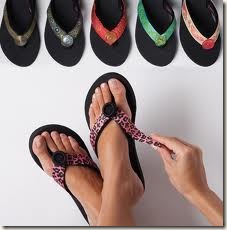 At 16 years of age, Lindsay Phillips had an idea to create flip-flops with straps that could be changed during a school project. It is project that this year her company will bring $30 million in revenue says AOLSmallbusiness.

The idea is very simple, you buy one pair of flip flops and renew their appearance with new straps. They look new and different every time and can be worn with different clothes depending on the occasion.

Her company is now producing other products such as shopping bags, scarves and sandals for children.

It was initially a hobby until someone told her that it was a brilliant idea that she could make some money from it.

I watched an interview with her in an Australian breakfast show, yes her products will now be sold in Australia as well, she said that the key was for her to believe in herself and do something about it.

She could have stuck with her hobby, but no, she had some initiative and took her idea to the next level.

The key is believing in yourself, getting motivated and, mostly importantly, doing something.

If you want become financially independent, pay off some debt, get a new job or whatever your project might be, the key is to be motivated and so something, act on it. You will never know the outcome if you don’t do something.

I learned a lot about it from a book called the Science of Getting Rich and almost everyday I read success stories about people that believed in themselves, took their idea to the next level and became very successful.

Do something today, you never know what you could achieve.

What is your favorite passive income strategy